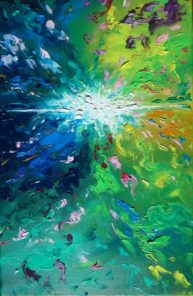 Fusion of a Star, oil on canvas, 41x27cm, Available

Fusion of a Star, an oil on canvas with a deep sonn that I wanted to put in picture. The difficulty was that this idea was not a precise image nor really a feeling, but rather a moment, a brief action that is dissolved in the past, erased from my memory and of which only a fleeting idea remains.

This moment that I wanted to represent I have already lived it, maybe you have too! It is a very brief moment, light and fast, during which our mind is fully refused with the essence of everything, with the universe, the consciousness, the EVERYTHING. This is the moment when our consciousness is one with the universe, and during which we understand all its workings. That moment when we KNOW consciously and fully understand EVERYTHING.
Then as quickly as it comes, it fades away. Like an early morning dream that we can’t remember, but we are sure that we have dreamt of something important… All that remains is the feeling, the vague impression of the moment…

It is this moment that I wanted to represent, this “fusion”, this “rebirth”, or “re-recognition”. Let’s say this moment during which our being, our soul rises and reconnects to the whole, but which is far too high, far too light and complete to be assimilated by our body of flesh.

Free delivery in metropolitan France
Delivered with invoice and certificate of authenticity.